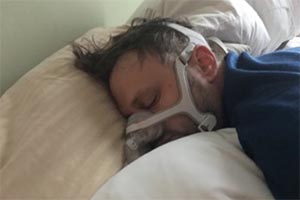 More than 18 million American adults have one of the two sleep apnea types – obstructive sleep apnea or central sleep apnea – where breathing repeatedly stops and starts during sleep. It is thought to be associated with a drop in arterial oxyhemoglobin saturation and/or an electroencephalographic arousal.

“Apnea” actually owes its name to a Greek word meaning “want of breath”. “Sleep apnea” is cycles of significant pauses in breathing (absence of inspiratory airflow for at least 10 seconds) and partial neurological arousals that ultimately have an impact on sleep quality and overall health. The disordered breathing events are associated with a profile of perturbations. These include intermittent hypoxia, oxidative stress, sympathetic activation, and endothelial dysfunction.

Sleep apnea is classified as either obstructive or central. Regardless of the sleep apnea type, it is a result of an absence of brainstem neural output to upper airway muscles. The pattern of this neural output absence determines the phenotype of OSA (Obstructive Sleep Apnea) or CSA (Central Sleep Apnea).

In OSA, there is a complete or partial upper airway occlusion even though inspiratory muscles are working normally. Here, one can see the tongue falling backward with absent air flow. In contrast, CSA occurs when there is a transient reduction in breathing rhythm driven by the brainstem.

OSA is repeated episodes of complete upper airway obstruction during sleep. OSA symptoms include loud snoring, periods of apnea and hypoxia, and sudden arousals from sleep. Studies support that OSA can lead to the development and progression of a number of cardiovascular disorders, including hypertension, cardiac arrhythmias, myocardial ischemia, infarction, and HF. In addition, OSA is known to be an independent risk factor for postoperative complications.

The apnea-hypopnea index (AHI) is used to classify the severity of OSA. This is the number of apnea and hypopnea events per hours of sleep during overnight polysomnography (PSG) monitoring. An AHI of more than 30 is usually defined as a severe OSA.

CSA is not very common in the general population. Rather, it is usually seen among patients with heart failure, stroke, atrial fibrillation, or opioid use with the two most common causes of CSA being heart failure and opioid use. Studies show that CSA occurs in 30% to 50% of HF patients.

CSA is a temporary withdrawal of central (brainstem-driven) respiratory drive. This withdrawal results in the cessation of respiratory muscle activity and airflow. It appears as a form of periodic breathing with recurring cycles of Cheyne-stokes respiration. In other words, a person will have a breathing pattern that is a progressively deeper and faster, followed by a gradual decrease with a temporary stop or an apneic episode.

Sleep has multiple pronounced effects on the respiratory system and breathing control. A complex matrix of peripheral and central receptors, as well as rhythm generators, interact continuously to control the respiratory system. This includes interaction with the lungs, chest wall, and arterial blood gas content.

Understanding pathogenesis for CSA is more complex. Research supports that an increased respiratory control in response to changes in PaCO2 above and below the apneic threshold is in center to the pathogenesis of CSA. During the day, several metabolic and behavioral factors affect the rate of production of CO2. However, during sleep metabolic factors affect the breathing control. Therefore, during sleep, any increase in PaCO2 will stimulate ventilation where any decrease in PaCO2 will suppress it. When PaCO2 falls below the apneic threshold, respiration ceases.

Diagnostic tests are usually performed in a sleep center. With newer technology, it is also possible to perform a sleep study in the patient’s home:

Left untreated, sleep apnea can have serious and life-shortening consequences. Studies support that sleep apnea is associated with the incidence and morbidity of hypertension, coronary heart disease, arrhythmia, stroke, automobile accidents caused by falling asleep at the wheel, diabetes, depression, and other ailments.

Patients can find help for their sleep apnea here: