Studies show that healthcare workers commonly suffer from lack of sleep symptoms, and continued sleep deprivation puts both the workers’ and their patients at risk. 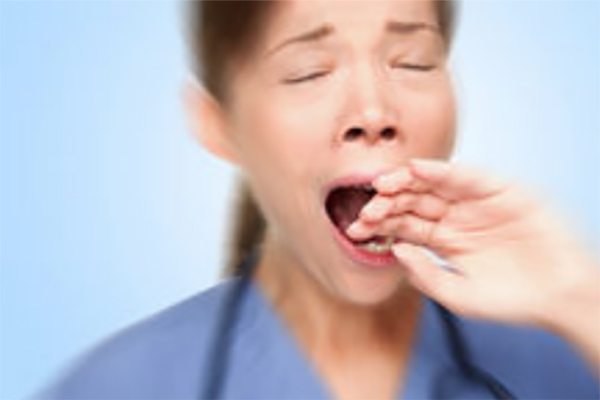 Are you suffering from lack of sleep – symptoms such as being tired, cranky, and foggy-brained? If so, you’re not alone. The National Sleep Foundation says close to 22 million Americans experience sleep deprivation, and that figure is reportedly increasing each year due to the occupations that require around-the-clock attention. Law enforcement, energy, manufacturing, and healthcare are the top trades with rotating schedules.

Lack of Sleep Can Be Fatal

Think sleeping a little less won’t hurt anyone? Think again! Studies demonstrate that healthcare professionals in a sleep-restricted state suffer decrements in performance that commensurate with those induced by a blood alcohol level of 0.05 to 0.10%. Additionally, physicians in training have self-reported that sleep deprivation resulted in 300% more fatigue-related medical errors that led to a patient’s death… lack of sleep is very serious!

How much sleep should you be getting?

A minimum of 7 to 8 hours of sleep is recommended in a 24-hour time period, but many healthcare workers only get 5 to 6 hours (or even less) daily.

Symptoms of Lack of Sleep

Additionally, sleep-deprived individuals are at a high risk for developing cardiovascular disease, hypertension, diabetes, and are more likely to die from a heart attack.

Studies have demonstrated that working long hours poses risks to both healthcare providers and their patients. According to The Joint Commission Journal on Quality and Patient Safety, nurses working greater than 12.5 to 13 consecutive hours report:

The bottom line… when you as a healthcare worker are sleep deprived, your productivity levels and quality of work will be compromised. You will be creating an environment where it is not a matter of if your patients will be harmed, but a matter of when, and to what magnitude. So, make sure you are getting enough sleep!

Strategies to Get Enough Sleep