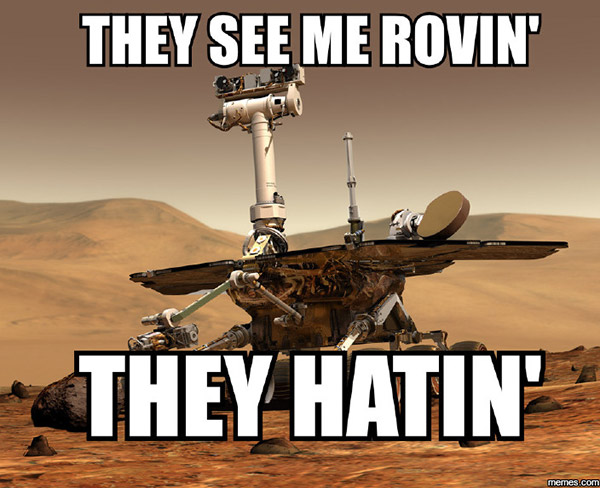 Unless you’ve spent the last few years under an earth-bound rock, you’ve become familiar with the name “Curiosity”. On August 6th, 2012, NASA’s rugged and technologically astounding rover landed safely on the surface of Mars and began tweeting as soon as its wheels hit the dusty surface. This National Aeronautics and Space Administration‘s technological achievement electrified the world, spurring thousands and thousands of discussions on social media outlets in multiple languages. Unfortunately, a thread of discussion began rearing it’s ugly head almost as soon as the rover began it's a journey, as it has every time NASA is in the spotlight: “Why should we spend money on NASA when there are so many problems here on Earth?”. I could easily churn out a list of hundreds of cool inventions made possible by NASA, including memory foam, scratch-resistant lenses, insoles, cordless tools, and long-distance telecommunications, but I thought I’d do some digging to see what kinds of things they’ve done to help rehab professionals in particular treat patients and improve lives.

Digital signal-processing techniques, originally developed to enhance pictures of the Moon for the Apollo Program, are an indispensable part of Computer-Aided Tomography (CAT) scan & Magnetic Resonance Imaging (MRI) technologies used today worldwide. The need to find imperfections in aerospace structures and components, such as castings, rocket motors, and nozzles led to the development of a medical CAT scanner which searches the human body for tumors or other abnormalities.

Inspired by the space suits Apollo astronauts wore to survive the moon’s harsh climate, the custom-made cool suit that circulates coolant to lower body temperature. The suit helps patients with multiple sclerosis and heat-related neurological disorders manage their symptoms by lowering their core body temperature and dramatically improves the symptoms of multiple sclerosis, cerebral palsy, spina bifida, and other conditions.

Adam Kissiahhe utilized the technical expertise he learned while working as an electronics instrumentation engineer at NASA's Kennedy Space Center for the basis of his invention. This took place over 3 years when Kissiah would spend his lunch breaks and evenings in Kennedy's technical library, studying the impact of engineering principles on the inner ear. In 1977, NASA helped Kissiah obtain a patent for the cochlear implant.

NASA's continued funding, coupled with its collective innovations in robotics and shock-absorption/comfort materials are inspiring and enabling the private sector to create new and better solutions for animal and human prostheses. Advancements such as Environmental Robots Inc.'s development of artificial muscle systems with robotic sensing and actuation capabilities for use in NASA space robotic and extravehicular activities are being adapted to create more functionally dynamic artificial limbs. Other private-sector adaptations of NASA's temper foam technology have brought about custom-moldable materials offering the natural look and feel of flesh, as well as preventing friction between the skin and the prosthesis, and heat/moisture buildup.
Source

In 1977 NASA developed a robotic wheelchair manipulator that responds to 35 one-word voice commands, helping patients to perform daily tasks like picking up packages, opening doors, and turning on appliances.

NASA research and development of training programs and machinery to prepare, maintain and rehabilitate astronauts has contributed substantially to the general body of knowledge on physiology. It has also resulted in commercially available, NASA-inspired exercise and physical therapy equipment. Contemporary Design licensed the technology from NASA and produced a commercially available piece of equipment called the Shuttle 2000-1. Primarily found in diagnostic and rehabilitation environments, it’s one of the few machines to be used by patients on bed rest. Not only does it keep these patients’ hearts healthy and their blood flowing properly, but the Shuttle 2000-1 also prevents seldom-used bones and muscles from atrophying.
Source

AlterG Anti-Gravity Treadmill provides support for physical rehabilitation patients with diminished lower-body strength. But there’s one big difference between it and the NASA model, because, technically, the treadmill does on Earth the opposite of what it does in space. In space, the air adds weight and provides healthy resistance. On Earth, it unloads weight. Today, the G-Trainer is used widely in rehab centers, military hospitals and in the training facilities of both professional and college sports teams.
Source

S.A.M. is a wheeled walker with a unique harness that supports the patient's body weight and controls the patient's pelvis without restricting hip movement. Electronic linear actuators raise and lower the harness, varying the weight placed on patients' legs.
Source

So why should we continue funding NASA or any space exploration? Steinn Sigurdsson (Dynamics of Cats) says it better than I ever could:

“Because: we look out, and wonder, and explore;

and we do what little we can on the margin of our busy lives to explore the bigger universe, today;

and that is one of the things that makes life worth living,

and gives us hope that the future can be better, for us and for future generations.”